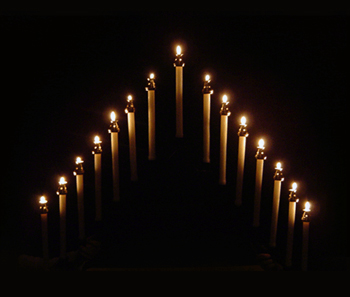 “Tenebrae” is the name given to the service of Matins and Lauds belonging to the last three days of Holy Week. It differs, in many things, from the Office of the rest of the year. All is sad and mournful, as though it were a funeral service; nothing could more emphatically express the grief that now weighs down the heart of our holy Mother the Church. Throughout all the Office of Thursday, Friday and Saturday, she forbids herself the use of those formulas of joy and hope wherewith, on all other days, she begins her praise of God. Nothing is left but what is essential to the form of the Divine Office: psalms, lessons and chants expressive of grief. The tone of the whole Office is most noticeably mournful: the lessons taken from the Lamentations of Jeremias, the omission of the Gloria Patri, of the Te Deum, and of blessings etc., so the darkness of these services seems to have been designedly chosen to mark the Church’s desolation. The lessons from Jeremias in the first Nocturn, those from the Commentaries of St. Augustine upon the Psalms in the second, and those from the Epistles of St. Paul in the third remain now as when we first hear of them in the eighth century. 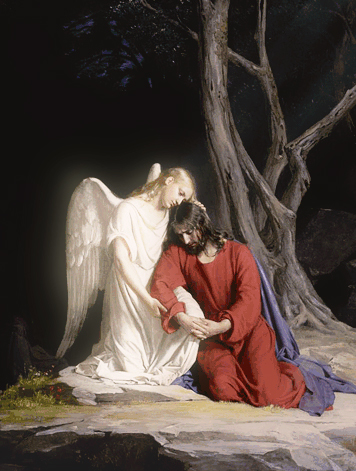 The name “Tenebrae” has been given because this Office is celebrated in the hours of darkness, formerly in the evening or just after midnight, now the early morning hours. There is an impressive ceremony, peculiar to this Office, which tends to perpetuate its name. There is placed in the sanctuary, near the altar, a large triangular candlestick holding fifteen candles. At the end of each psalm or canticle, one of these fifteen candles is extinguished, but the one which is placed at the top of the triangle is left lighted. During the singing of the Benedictus (the Canticle of Zachary at the end of Lauds), six other candles on the altar are also put out. Then the master of ceremonies takes the lighted candle from the triangle and holds it upon the altar while the choir repeats the antiphon after the canticle, after which she hides it behind the altar during the recitation of the Christus antiphon and final prayer. As soon as this prayer is finished, a noise is made with the seats of the stalls in the choir, which continues until the candle is brought from behind the altar, and shows, by its light, that the Office of Tenebrae is over. 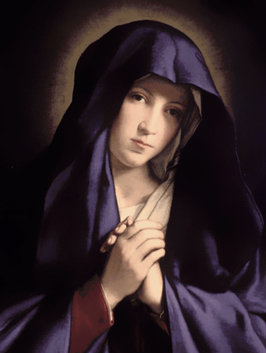 Let us now learn the meaning of these ceremonies. The glory of the Son of God was obscured and, so to say, eclipsed, by the ignominies He endured during His Passion. He, the Light of the world, powerful in word and work, Who but a few days ago was proclaimed King by the citizens of Jerusalem, is now robbed of all his honors. He is, says Isaias, the Man of sorrows, a leper (Isaias 53:3,4). He is, says the royal prophet, a worm of the earth, and no man (Psalm 21:7). He is, as He says of himself, an object of shame even to his own disciples, for they are all scandalized in him (Mark 14:27) and abandon Him; yea, even Peter protests that he never knew Him. This desertion on the part of His apostles and disciples is expressed by the candles being extinguished, one after the other, not only on the triangle, but on the altar itself. But Jesus, our Light, though despised and hidden, is not extinguished. This is signified by the candle which is momentarily placed on the altar; it symbolizes our Redeemer suffering and dying on Calvary. In order to express His burial, the candle is hidden behind the altar; its light disappears. A confused noise is heard in the house of God, where all is now darkness. This noise and gloom express the convulsions of nature when Jesus expired on the cross: the earth shook, the rocks were split, the dead came forth from their tombs. But the candle suddenly reappears; its light is as fair as ever. The noise is hushed, and homage is paid to the Conqueror of death.

- Excerpted from the revered Liturgical Year by Abbot Gueranger, the Catholic Encyclopedia and other sources

“I just wanted to thank you for the excellent customer service provided by your online shop and the very fine quality of scapular (the best I've seen) and Miraculous medal. I admire the wonderful work you are doing towards the restoration of Holy Church and Her glorious traditions.”

“Out of all of the on-line religious goods stores I've found, the articles on your website are all quality without the kitsch. I received my order of religious jewelry super fast. Thank you. I’m so happy to have a place to go when I need a quality sacramental.”

“Every item is absolutely beautiful! I have not encountered any other service, either online or brick-and-mortar establishment, that offers items of the same exquisite quality as your sacramentals. The aesthetic beauty is not only pleasing to the eye but inspires devotion in the heart and a more ardent desire to please God. I will definitely be using your wonderful service for most of my devotional needs! Thanks again! God bless you, Sisters.”

“Excellence is the Sisters trademark! As always, a smooth easy means of purchase, coupled with prompt shipping . The Items I have purchased over the years are always of superb quality and workmanship. I could not be more pleased.”

“I have now purchased at least a dozen brown scapulars from the Sisters of Carmel and have always received items of the utmost quality that wear very well. Adding to my satisfaction is that the Sisters charge a standard USPS shipping rate for the items, i.e., they do not add to one’s cost by charging inflated “shipping and handling” charges. Furthermore, my order was shipped one business day after I placed my order. We are all called by God to serve within the confines of His graces to us. The Sisters of Carmel are models of that calling.”

“I have received my orders from you and again want to thank you for them. The Blessed Sacrament and Seven Dolors chaplets are beautiful and will be treasured by me for many years. As others have said, the pictures on the web site don’t do them justice. I also want to thank you for the books you carry. They are clearly selected with the goal of deepening faith. It is wonderful to find a place where I can go and know that I will receive quality, not only of merchandise, but of faith. Again, thank you for the work you do.”

“I just received my scapular and crucifix along with the Miraculous Medals. I am so very pleased with the quality of the items! Truly the BEST on-line selection of sacramentals. Thanks so much! I will be ordering from you again soon.”

“Your website is like an oasis of good spiritual things! You do such magnificent work, the chaplets are amazing! The badges are like having good friends near, and your books are so nourishing to the soul. I feel so blessed to have found you. Thank you again, and you are in my prayers.”

“Unbelievable service – I received my order on Monday, exactly five days after placing it. Your customer service is outstanding. Everything was securely packaged and arrived in perfect condition. The ceramic ornaments are lovely, and I can’t wait to add them to my Christmas tree this year. The exquisite suncatcher will be placed in my kitchen window where it will be appreciated every day. And as for the ‘In Paradisum’ CD, all I can say is it’s on continuous loop right now. I love early sacred choral music and have a collection of CD’s, but this one is stunningly beautiful and has become my new favorite.”

“I wanted to let you know that I received the Rosary that you created for us just a short while ago. Sisters, it has to be without exception the most beautiful Rosary I have ever held. It is exactly how I envisioned it and the size is perfect. You were also right about the beads; the color is exceptional! Thank you, thank you, thank you each and every Sister for doing such a perfect job and for putting up with us throughout this whole process. While rersearching this project, every time I looked elsewhere, I always seemed to be guided back to the Sisters of Carmel, and now I know why...PERFECTION!

“I just wanted to thank you for the exceptional care you took in packing/shipping the books and other items in my order.... It’s the little extra touches like this that go a long way with the customer and lets them know how much you value their business.”

“I received my sterling silver Pardon Crucifix yesterday. It was such a pleasure to receive it. Everything was packaged and presented with such care and finesse. The crucifix was crafted with such intricate and beautiful details that it does not do justice to look at it through the Internet. One has to order it to relish what a beautiful piece of art it is. Again, the manner you package the crucifix, the enclosures contained within, and the quality of craftmanship itself has totally exceeded my expectations.”

“When I asked my priest to bless my new scapular, it took his breath away by its handmade beauty. I told him it had been made with loving hands by the Sisters of Carmel. I felt the Holy Spirit say to give it to him. I did. He was overwhelmed. I ordered another one for myself and it arrived today. I love it. It is so beautiful. I will kiss it every day. I am eager to have it blessed tomorrow and wear it immediately. Thank you.”

“I love to order any item from your site. Always such high quality and a joy for all that I give them to. Your care and blessings are felt from the Holy Spirit to us. Thank you and God bless you.”

“Once again the best. I appreciate you quickly sending me the scapular. I could have gone locally to purchase one, but I truly appreciate your craftsmanship and customer service.”

“This is the most beautiful rosary I have ever seen crafted. Combining high quality materials, skillful labor, and loving prayer, the Carmelite Sisters are hands down the best choice to go with when shopping for rosaries. Reasonably priced, quick delivery, and wonderful customer service, I will DEFINITELY be ordering all of my future rosary purchases from ”

Be the first to know about brand new items, discounted goods, new website features, news from the nuns, and much more.